During a weekly catechesis, Pope Francis spoke about the dignity of each and every child. The worth of children does not come from their beauty, their achievements, or how closely their opinions match that of their parents, the Holy Father said in February 2015. Instead, a child’s worth is inherent; it comes from being made in the image of God. Unfortunately for many children, abuse hinders their ability to see their worth and to feel love.

The month of June observes several days that raise awareness about the dignity of children and the need to protect them — topics always worth drawing attention to in society.

On June 4, the United Nations recognized an International Day of Innocent Child Victims of Aggression. The day acknowledges the pain suffered by children worldwide due to physical, mental, and emotional abuse, especially in cases of violent conflict. While U.S. children face different experiences than those in the middle of the Syrian war, for example, the impact of abuse is unfortunately still strongly felt in American communities and homes.

Research shows up to ten million children across the United States annually are exposed to some sort of domestic violence. Domestic violence has significant impacts on children, who may develop depression, anxiety, Post-Traumatic Stress Disorder (PTSD), or other mental health conditions as a result of their experiences. These children may struggle to develop healthy relationships and may demonstrate increased aggression, difficulty concentrating, or destructive behavior that can lead to troubles with substance abuse, troubles in school, or troubles with the law (Michigan Office of Children’s Ombudsman). These issues can all have long-term consequences for the child and society as a whole. According to Michigan Child Protective Services, approximately 12,655 cases of abuse and/or neglect have already been confirmed between October 2016 and March 2017, impacting over 20,000 children.

The World Day Against Child Labor offered another opportunity for awareness this month on June 12. Child labor has a significant impact on a child’s development and well-being. According to the United States Bureau of International Labor Affairs, there are approximately 168 million child laborers around the world, with 85 million working within hazardous conditions. The Social Compendium of the Catholic Church calls child labor “a kind of violence that is less obvious than others” but “not…any less terrible.” Efforts across the globe since 2000, including projects from U.S. international aid, have cut the number of children in hazardous labor by half. While these efforts should be applauded, more work remains.

Michigan Catholic Conference (MCC) advocates each legislative session for policies that are beneficial for children and families and that combat violence and abuse. This year, MCC collaborated with the Diocese of Lansing, Livingston County Catholic Charities, and St. Vincent Catholic Charities to offer a conference on human trafficking, including the dangers it presents for children. MCC has advocated alongside Catholic Relief Services for continued funding of a grant program that offers opportunities to families internationally, so they do not need to rely on child labor. Recently, MCC supported state legislative efforts to prohibit female genital mutilation on minors, which has no health benefits and can lead to short and long-term complications. Protecting children and offering them loving environments in which to grow continues to be a priority of the Catholic Church. 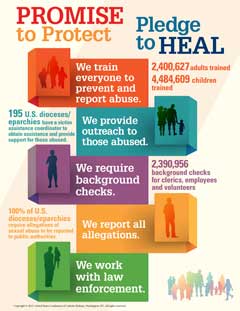 Promise to Protect — Pledge to Heal

In 2002, the U.S. bishops adopted the Charter for the Protection of Children and Young People to establish greater protections and to address the pain caused by these crimes. According to the 2015 annual audit, the U.S. Catholic Church has trained ninety-eight percent of its over two million volunteers, employees, educators, and clergy in parishes to prevent and report child abuse, as well as more than 4.4 million children to recognize the signs. Background checks have been run on close to 2.4 million volunteers, employees, and clerics. And each of Michigan’s seven arch/dioceses have offices that provide child protection resources and victim assistance that will continue to improve the Church’s response to child safety. No institution in the country has done more in the last fifteen years to protect children than the Catholic Church.

Many opportunities exist to reaffirm the dignity of children, including becoming a foster parent, mentor, or tutor; educating others about the signs of violence or exploitation; or supporting organizations that work with at-risk or abused children. Those who suspect cases of abuse or neglect of children can call Michigan’s hotline at 855-444-3911.

The Word from Lansing is a regular column for Catholic news outlets. Through these columns, MCC outlines current advocacy issues of importance to the Conference and discusses the Catholic position and role in the political process. This publication complements the more regular updates provided by MCC’s Catholic Advocacy Network. Michigan Catholic Conference is the official public policy voice of the Catholic Church in this state.